Lahore: In a suicide bomb attack, at least eight people — five policemen and three civilians — were killed and 25 others injured targeting an Elite Force van detailed to the security of the Data Darbar shrine.

In one of the country’s most visited shrines Data Darbar, blast took place at 8:45am in the proximity of the police mobile, which was parked near Gate 2 of Darbar. 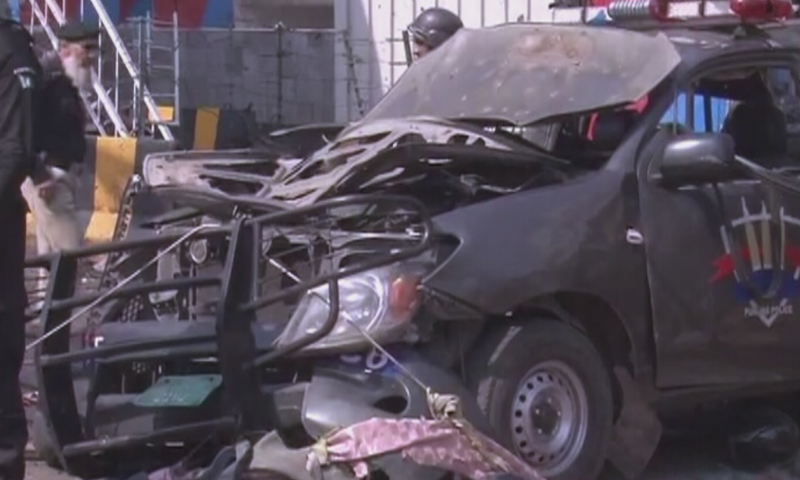 Police mobile was the targeted in this suicide attack, Police officials said.

He told reporters that the attack “100 per cent targeted police”, noting that police are posted near the shrine around the clock to provide security.

The assailant could have caused more damage because of the direction he had approached from, but he made a beeline for the police car stationed in the area for protection of the shrine, IGP said.

The bomb contained seven kilograms of explosive material, it took place around 200 to 300 meters from the actual entrance to the shrine.

The injured have been shifted to the Mayo Hospital.

A rescue operation was conducted in the area before it was cordoned off for investigation. Entry to Data Darbar has since been restricted.

The IGP said police will share their findings once they conclude their inquiry. A heavy contingent of police, Counter-Terrorism Department and forensic officials are accumulating evidence from the site of the attack. Security remain alert during the month of Ramadan.

Prime Minister Imran Khan expressing grief and condoling with the victims’ families for their loss.

Chief Minister Usman Buzdar has ordered an investigation into the blast and has cancelled his trip to Sargodha, Bhakkar and Sheikhupura. He has called an emergency security meeting.

306 police officials in the city have so far lost their lives in the line of duty, according to the DIG Operations Lahore.

This is an evolving story that is being updated as the situation changes. Initial reports in the media can sometimes be incorrect. We will try to confirm timeliness and accuracy by depending on reliable sources, such as concerned, qualified authorities.