A strongest earthquake with 6.4 magnitude hits Southern California on Thursday, according to the ‘U.S. Geological Survey’ it was centered near Ridgecrest, a community west of the Mojave Desert and about 150 miles north of Los Angeles.

According to county officials, emergency in Kern County, California, have reported almost two dozen incidents as well as people requiring medical aid and structure fires everywhere in the city of Ridgecrest, where a regional hospital also had to be evacuated. A crack on Highway 178 is seen as construction workers fix a broken water line south of Trona.

Been living in Los Angeles all my life. That was the longest earthquake I’ve ever experienced. Not jerky. Smooth and rolling. But it was loooong. It was so long I thought for the first time ever “Is this the big one?” Damn. Respect Mother Nature. She’s the boss.

Officials did not instantly report about any deaths or major wounds due to the earthquake.

In Ridgecrest, near the center of the quake, Mayor Peggy Breedon said fires have broken out, gas lines have been broken and wreckages has dropped off some buildings everywhere in the city.

Breedon told MSNBC, “We are used to earthquakes but we’re not used to this significance.”

Breedon told residents to take care for each other as reverberations carry on, particularly for the elders.

According to seismologist Lucy Jones at the California Institute of Technology, more aftereffects, even another large earthquake, could happen in the upcoming days.

Jones told, the earthquake was the largest in Southern California since 1999.

Seismic activity is not strange in the part of California where the earthquake happened, seismologist Rob Graves said at a Thursday afternoon briefing. 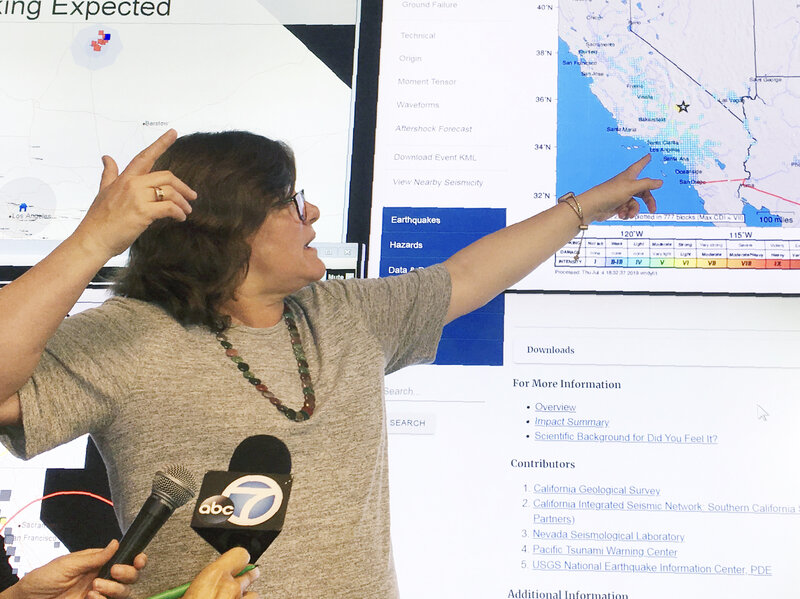 Seismologist Lucy Jones talks during a news conference at the Caltech Seismological Laboratory in Pasadena, Calif., on Thursday. A strong earthquake rattled a large swath of Southern California and parts of Nevada on Thursday morning.

He said, “This was not unexpected in this area,” Graves said. “Having a 6.4 in this part of Southern California” is typical.

“All seems to be very much under control!” President Trump tweeted.

Lightning storm, easterly wind: How the wildfires got so bad