Aerial photo taken on July 1, 2019 about 5,000 people get together at Victoria Park in Hong Kong on Monday. Express a formation which spells out the words “I LOVE HK” to celebrate the 22nd birthday of the Hong Kong Special Administrative Region (HKSAR) in south China’s Hong Kong.

Dressing up with red or white caps, Hong Kong people formed the giant words with their bodies at the football field of the park, with “LOVE” showed in a red heart.

Hong Kong reverted to the homeland on July 1, 1997. Citizens of Hong Kong applauded and sang in unanimity to show their happiness.

Siu said, “During the past 22 years, Hong Kong has made notable progress along with the development of the whole country.” It was the third straight year for a volunteer surnamed Siu to play a part in such a memorial event.

Another volunteer, nearly 70 years old, standing in the red heart pattern, said he has faith Hong Kong will develop better and better. 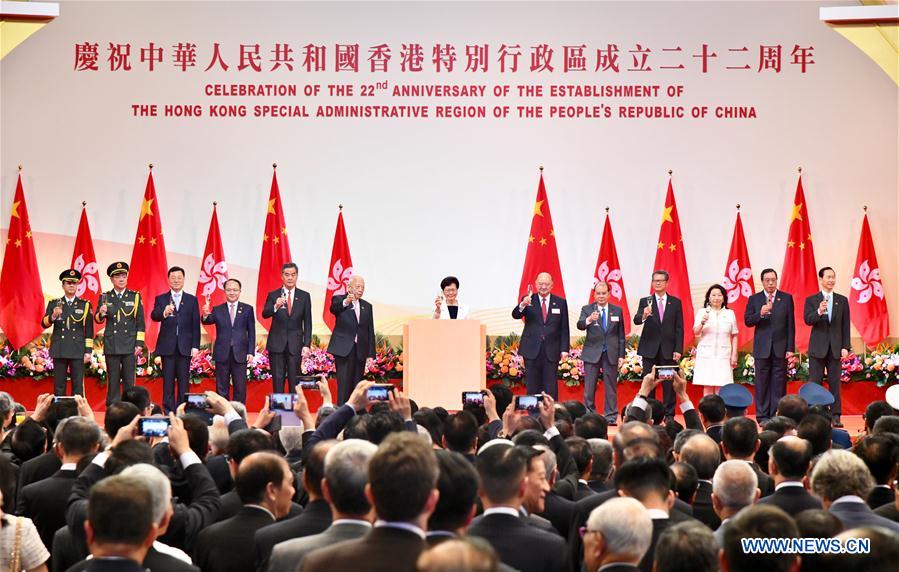 Chan Yung, chairman of the Hong Kong Celebrations Association, the organizer of the event, said, “Today’s event demonstrated our love of Hong Kong and our pride in the country’s high-speed development.”

He further added, that he expects these get together will bring more “positive energy” to Hong Kong.

The festival came as part of the three-day Greater Bay Festival ending Monday evening, which was designed to mark the 70th anniversary of the founding of the People’s Republic of China and the 22nd anniversary of Hong Kong’s return to the homeland and the formation of the Hong Kong SAR. The anniversary has fascinated 180,000 tourists so far.