CLEVELAND — Clay Matthews is definitely deserves this honor to be selected in Ring of Honor. He was honored on Sunday night Football game against the Los Angeles Rams where his son Clay Matthews III, plays.

“I was honored,” Last month when this honor was announced where Matthews was selected, he spoke. “I mean, the Browns have a pretty good legacy of players in that group. We lived through that generation of players, mostly in the 60s, who were so successful, and to be included in that group is just an honor.

You can re-watch the whole ceremony in tweet below:

“It seems like they’re doing a pretty good job of picking talent around there, so I’m going to ride that wave. The Browns, even though they had a little hiccup for a while when the team went away and came back, that’s what you think of when you think of the NFL. At least for myself growing up, the Browns, Packers, Bears, those type of teams that were there from long ago. To be included at this level is just a huge honor.” 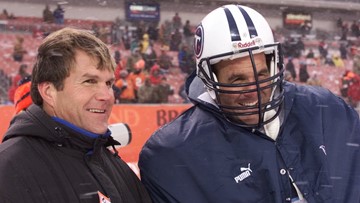 Matthews was picked at first-round of the Browns in the 1978 NFL Draft, Where he contributed his 16 years in Cleveland in 232 games, 216 of which were starts, he registered 76.5 quarterback sacks, 1,430 total tackles, 14 interceptions, 24 forced fumbles and 13 recoveries.

Matthews has been a four-time Pro Bowler in Cleveland, his ranking is on first position in Browns history with 76.5 sacks, games played and most consecutive seasons, also in total years of service to the organization, he ranks on second position.

All those 19-years of experience of his career, Matthews knows how to set his standards for the rest of the defense and he made a proof of himself to be the most remarkable and tough player despite of having done those physical activities and smashes during his profession.

Matthews played 278 games in a whole, 248 contests was on his start position whereas in 12 games he served on field position but he was part of only season one during his all two decades career.

What a special night for Clay Matthews Jr. — our newest Ring of Honor inductee#LARvsCLE pic.twitter.com/MwMzCiujgr

The “Ring of Honor” event was created by former team executive Mike Holmgren, where it casts 16 Hall of Famers (One Coach with 15 players), this time Joe Thomas a former All-pro left tackle has also been inducted with Matthews for his 10,363 consecutive snaps played streak.

Matthews’s selection as in Ring of Honor was celebrated by his family and friends and also by his loyal fans.

“I think it is great,” said by Mike Priefer who is Browns special team coach, he is native of Northeast Ohio who grew up watching Matthews play. “What a great player he was. You guys know that. Just growing up, he was one of the stalwarts of that defense. He always played so hard. He always just seemed to show up every week. He was a fun guy to watch when I was a young man growing up.

“Whenever we beat Pittsburgh, that was always fun. He helped us beat them a few times. Not as much in the 70s, but the 80s were pretty good that I remember.”